Celebrating Nexus at 30: An Interview with Bill Berghuis 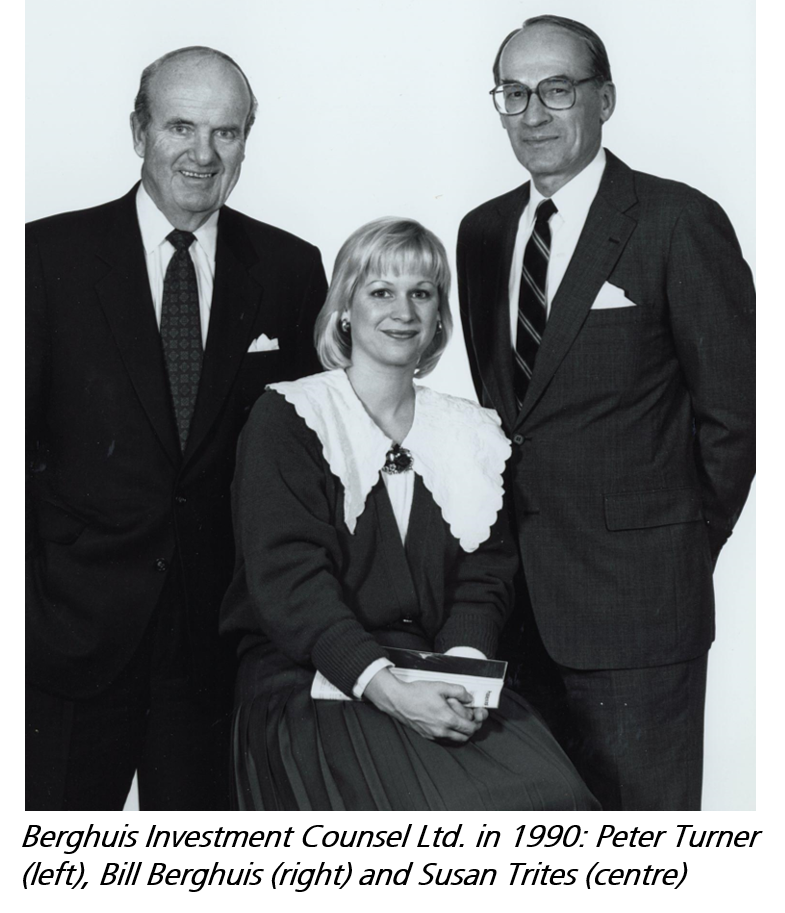 Celebrating Nexus at 30: An Interview with Bill Berghuis

2018 rang in the 30th anniversary of Nexus Investment Management. Our founder, William W. Berghuis, has spent his entire career in the investment industry, not only building a successful investment counselling firm, but also serving as a governor of the Toronto Stock Exchange and president of the CFA Society Toronto. Bill is a graduate of Princeton University and the Harvard Business School, and is a military veteran, having served with the U.S. Army in Japan.

In 1988, Bill Berghuis hung out his Bay Street shingle at 141 Adelaide Street West. Joined by Susan Trites as office administrator, they became Berghuis Investment Counsel Ltd. A few years later, M.A. (Peter) Turner came on board as portfolio manager and continued to work with Bill until his retirement.

My, how times have changed! Bill still comes into the office. But instead of being greeted by two, he’s greeted by eighteen. The firm has grown in other ways as well… this year we reached $1.9 billion in assets under management! Regardless of whether you think we are now a big small firm or a small big firm, our growth from a combination of new clients, additional funds from existing clients and market appreciation has continued to be strong and steady.

So, recorder in hand, this interviewer sat down with Bill to gain some wisdom and listen to the story of an interesting life.

How did your interest in investing start?

I was in my early years in Princeton and became aware of the success of companies like Standard Oil and Ford Motor. My father would write me a cheque for my expenses for the year, and said “you manage it”. So while I had to budget this money for school, I also discovered it was a means to invest. It wasn’t a lot, but that’s how I got going.

After I graduated from Harvard, I went into the army as a First Lieutenant and was headed for Japan. This move broadened my view of the world, as it made me aware of an economy that had been devastated by a war. Japanese companies were selling for pennies on the dollar, and their recovery over the late 50s and 60s was staggering. But you had to be patient and take a long-term view.

How did your professional investment career begin?

After my tour of duty ended in 1959, I decided to work for my father-in-law’s firm, Jones Heward & Company (JH&Co) in Montreal. Working there gave me a chance to acclimatize to Canada and learn about the Canadian economy and its major industries.

I stayed in Montreal until the early 60s when the firm opened up a Toronto office and asked me to run it. And over the next decade, I came to operate and develop the Jones Heward business here.

When did you start thinking about opening your own firm?

When I was with JH&Co running the Toronto operation, the principal function was to attract brokerage business. But individuals were earning money again and they were looking for a place to invest it. Mutual funds became big actors, and I left JH&Co. to explore what was out there. I worked for AGF for five years running its Japan Fund, and then joined Hodgson Roberton Laing on the institutional side. Throughout this time I continued to manage a number of individual accounts which had come with me from my JH&Co. days. So, when I finally summoned the courage to hang out my shingle, virtually all of the clients came with me. And that is when I started Berghuis Investment Counsel Ltd. (BICL).

When you started BICL, where did the investment philosophy come from? What was your mission?

JH&Co. was a different kind of broker; it was very early in managing brokerage accounts on a portfolio-type basis. Really quite an advanced approach for that day and age. I learned a lot from that experience.

My philosophy was to identify growth and income stocks, but primarily growth stocks. My objective was to help an individual or family by putting them into decent names. This meant a fair amount of quality, and the important thing there is what I call the “management factor”. The key is to identify superior management teams.

Lately we have written and presented a lot on wealth transfer and passing on family values. You have four children – each successful in their own right. What family values did you and Faith establish and how did you pass them on to your children?

From the early days, when the kids came home from school it was upstairs, get the homework done and then we’d all have supper together. Family communication was important to us. We’d talk about our day, and what was going on in the world. I credit Faith for all of that activity! As the kids got older, and reflecting my interests, there was a lot of talk about what makes a company work and what some of these companies were doing. I think they learned a lot during those times.

All the kids had paper routes for the cottagers, and the girls were very involved in taking care of the horses. That was the beginning of the development of their work ethic. We couldn’t have them swim in the river all day. After all, they had a paper route to deliver at four o’clock, and water to be pulled and horses to be brushed at five!

It was not even a question of whether the kids would go to university, so education was a particularly important family value. I learned my lesson early in life, going into my grade twelve year, sitting at the lunch table with my mother, father and grandmother. At some point I said, “I’m not so sure I want to go to university. I’d like to go out and see the world or work for a bit”. Oh my God… my father hung his head and my mother left the room crying. They were both university graduates themselves, and to have their oldest child talk about not going to university, well that was real heresy. I had to go downtown to have lunch with my father the next day. It was terrible!

So what do you think of Nexus now?

Nexus is about people, and I think they’re first class. At this stage one would be hard-pressed to put together a team that is working as well as this one. The pillars are in place: investment management, financial counselling, client service, operations and marketing/business development. And, we’ve reached critical mass where, from here on, I suspect it’s simply building on those pillars in the future just as we have in the past – by hiring outstanding people.

Readers with a keen eye will have picked up on a few familiar terms, straight from the mouth of our founder: “long-term”, “patient”, “growth”, “income”, “quality”, “superior management.” Many things have changed over the thirty years of this company. But some of the most important have stayed remarkably the same.

Thank you, Bill, for the wisdom you have imparted to so many, the positive contribution you have made to this industry, and for the fine business you have created in Nexus. To the next 30 years!

Author Name And Credentials:
Geoff Gouinlock, CFA
Topic:
Human Interest
Excerpt:
You don’t need to read a blog from your most trusted investment advisor to realize that 2020 might go down as one of the most notable and difficult
Read More

Author Name And Credentials:
Denys Calvin, CFA
Topic:
Inside Nexus
Excerpt:
Warren Buffett has a wonderful line. “Only when the tide goes out do you discover who's been swimming naked.”
Read More

Uncertainty… Who Needs It? Apparently, We Do.

Author Name And Credentials:
Alex Jemetz, CIM
Topic:
Investments
Excerpt:
It is not exactly a revelation to say that uncertainty contributes to stress. In “normal” times – take 2019, for example – three common sources of
Read More

Author Name And Credentials:
Dianne White, CPA, CA, CFP, TEP
Topic:
Wealth Planning
Excerpt:
Helping clients with their estate planning is something we do here at Nexus. However, we are often involved in identifying the best tools for the
Read More

Author Name And Credentials:
John C.A. Stevenson CFA
Topic:
Human Interest
Excerpt:
Over the last 25 years, we have written frequently about time. In fact, in 2010, our annual client presentation carried the same title as this article
Read More

Uncertainty… Who Needs It? Apparently, We Do.

Author Name And Credentials:
Alex Jemetz, CIM
Topic:
Investments
Excerpt:
It is not exactly a revelation to say that uncertainty contributes to stress. In “normal” times – take 2019, for example – three common sources of
Read More

China’s Larger Role in the World; Immortality in a Test Tube

Author Name And Credentials:
Devin M. Crago CFA
Topic:
Pearls of Wisdom
Excerpt:
Reading is one of the principal occupations in our profession. As we digest a wide range of material, interesting ideas and surprising facts – some
Read More

Author Name And Credentials:
Dianne White, CPA, CA, CFP, TEP
Topic:
Wealth Planning
Excerpt:
As the weather cools and the leaves begin to change colour, it seems to me that fall is the more natural start of a new year compared to the start of
Read More